Capt Bubba Carter, captain of the Tijereta out of Los Suenos Marina, is a legend. Recipient of the IGFA Tommy Gifford Award and known worldwide in the sportfishing community for his knowledge, skills, and contributions to the sport and conservation of wildlife.

HRG staff and the Los Suenos community, are lucky to have met Capt Bubba and have him fishing out of Los Suenos Marina for the last 10 years. Showing everyone how it’s done.

As he prepares for the 2020 Seamount Marlin fishing season, he took a few minutes and answer some of our questions.

What is the secret to your success?

“The secret to my success is to be the first one out, the last one in and go more days than anybody else, be well prepared, and pray for a little luck.”

He described his life on the water:

“I fished from Cape May New Jersey to Key West on the East coast and from Cabo San Lucas to Colombia on the west coast, most of the Caribbean, Leeward and Windward islands. Grenada, Venezuela, and Colombia.

I was in Australia, then to Madeira for a month, and did the whole Mediterranean for 4 months.

Came to Costa Rica in 1985 and fished mostly out of Flamingo, and in 1997 I left for Venezuela and made it my home  base for a few years, fishing St Thomas, Dominican Republic, and Aruba until 2010 when I returned to Costa Rica.”

That leads us to the next question, Why after seeing so much did you return to Costa Rica to reside permanently? Why was Costa Rica your choice of residence?

“In Costa Rica, you can fish 12 months out of the year and it’s slick calm 95% of the time, Australia, St Thomas, Dominican Republic are all very rough and with only a three month season and Venezuela was awesome but the country went socialist and feel apart and got very dangerous, with no food and no water. As I’m getting older and wiser, I wanted a place to settle down and Costa Rica met all the credentials and then some.

The seamounts are my favorite places to fish because it’s the best blue marlin fishing on the planet and I have had the opportunity to fish most places where you can catch blue marlin, the fish aren’t monster like Australia or Madeira but the action and amount of bites is better than any place in the world. Our best day at the seamounts, we caught 28 for 40 blue marlins, we caught our first fish at 5:15 we were fishing with Tom Wheaton and his buddy Spider the are both in there 60’s. A bucket list kind of trip.”

Capt Bubba explains, it takes on an average about 15 minutes to catch a blue marlin, he uses a secret lure often, we asked him to reveal this mysterious fishing magnet and he answered laughingly “yes, I  have a secret lure and I’m not going to tell you because it’s a secret”

We have fished enough to recognize a nice boat when you see one. Tijereta is 43 foot Island Boat Works.

“We have repowered the boat with new Cummins diesel motors,  added more fuel and new teak deck and covering boards, new paint job inside and out, all new electronics, 72-mile radar, Garmin chirp sounder and plotter, Garmin autopilot, new steering, flir night vision, two new Iridium VHFs, and Iridium Go sat phone, new sea keeper, to make things much more comfortable out there at night, a water maker so we always have plenty of fresh waters and an ice maker so we never run out ice, the boat has AC and hot water for showers it’s small but comfortable and rigged for day fishing or Seamount trips.” The captain explains.

It was a pleasure to sit with Capt Bubba, listening to all the stories, years of vast experience at sea as he refers to his life, with a humble demeanor.

“I have been lucky enough to have fished around the world, made great friends, and learned a great deal from some great fisherman.  I have caught over 11 black marlins over 1000 pounds, 1 blue marlin over 1000 pounds, caught a fantasy slam that has only been done by three other people in the world I have caught over 3000 blue marlins, over 30,000 billfish and  25,000 plus of those in Costa Rica, I still love my fishing, my boat,  Costa Rica and can’t wait to get out there and do what I do best!” 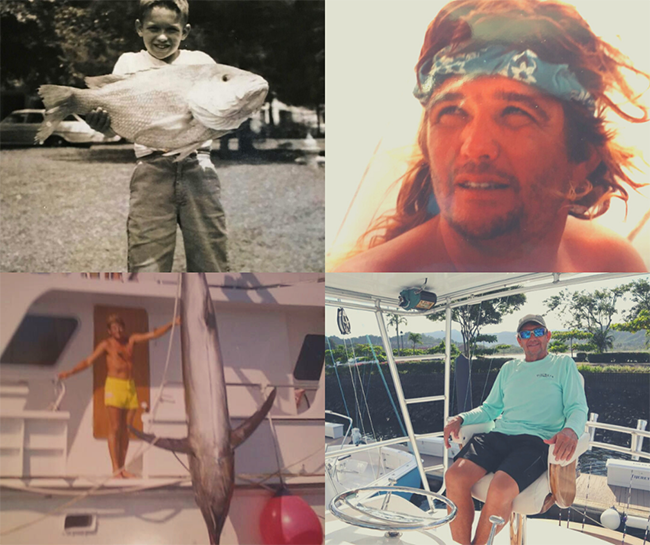