Our fishing season was put on hold for some anglers with plans to spend their winter in our endless summer haven, Los  Sueños Resort Costa Rica.

Teams from the United States, Costa Rica, Nicaragua, Venezuela, Brazil, Russia and other countries with anglers from around the globe, will return to finish the 3rd leg of Los Suenos 2020 triple crown, canceled due to the COVID 19 crisis.

But the fishing did not slow down, as a matter of fact, the fishing is hotter than ever! Costa Rica is known for a year-round bite and calms seas. Some boats are still fishing even after the airport was closed temporarily to prevent the spread of the virus.

Although the world has changed because of the global pandemic, fishing in Costa Rica remains spectacular. Through this blog will we bring you back to Los Suenos and the latest fishing
escapades.

During the first two weeks of March, most boats were having double-digit days of sailfish, with decent size blue marlin catch and release action. As captains were able to find pods of dolphin, anglers enjoyed a solid yellowfin tuna bite. Tuna fishing is consistent all year.

HRG’s client from Texas was able to catch and release 5 sailfish and one marlin. On the first day in Costa Rica, he contacted Mike Hardy, HRG’s owner, originally from San Antonio, Texas who has lived in Costa Rica for 20+ years. He asked Mike to arrange an easy inshore day for his children ages 5, 7, and 9. His kids had never been fishing. Mike contacted one of his trusted captains, Dana Thomas on the Hoo’s Your Daddy II, and set up half-day fishing for early morning. Fishing offshore was red hot and the marlin bite was only 20 plus miles from Los Suenos Marina, well, after the captain shared with them that information,  plans changed, and off they went looking for billfish and hoping to catch one for their kids. Ten minutes after the first bait was in the water, they hooked a blue marlin, everyone had a chance to reel and learn. Two and a half hours later, 5 sails were released and kids with tired arms were forever hooked on fishing.

April started off with a bang!! During the first week, Fish Tank’s Captain Ben Horning accomplished what most captains would have loved to have the chance to do by releasing his 8000th billfish in only 5.5 Years on Fish Tank! Laura Jessen hooked, tagged, and released the lucky number 8000. Laura’s team came in first in the Los Sueños Ladies ONLY Tournament in 2019 and second in the Ladies ONLY Tournament 2020.

Fish Tank owners Laura and Chris fish pretty much every day they get a chance, they are residents at Los Suenos and known members of the fishing community, they decided to quarantine in Costa Rica as they felt safer and as we are all saying now there’s no virus at sea. They’ve placed 4 times in Los Suenos Triple Crown and won the overall  1st place in 2019, with 6 dailies. Recently reported catching 25 plus sailfish a day and sometimes getting as much as 40+ bites.

We’ve had a few afternoon showers of rain, normal for the month of April, and with rain, the roosterfish bite gets better and better. Here are a few pictures of the latest rooster caught just a few miles from Los Suenos. 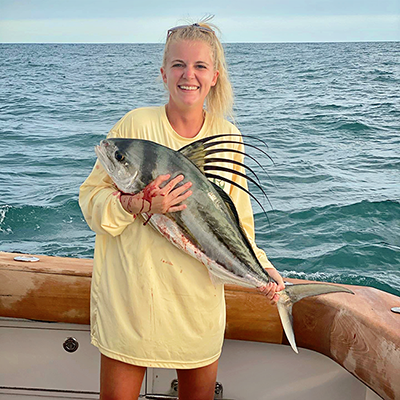 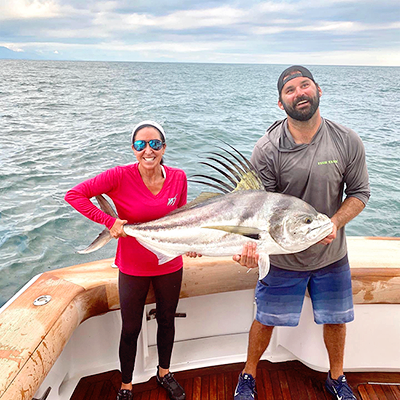